Study area Samples were collected from live trapped St Kilda mice, at Carn Mor, Glen Bay, Village Bay (Fig. 1). Trapping locations were geographically distinct from one another (i.e. they were separated by escarpments or habitat unsuitable for mice to occupy) and were representative of the area of the island in […]

Samples were collected from live trapped St Kilda mice, at Carn Mor, Glen Bay, Village Bay (Fig. 1). Trapping locations were geographically distinct from one another (i.e. they were separated by escarpments or habitat unsuitable for mice to occupy) and were representative of the area of the island in which they were placed. At each site, trapping was focused on areas with extensive rock (natural or built into walls) since a pilot study captured few mice in open areas.

Carn Mor (Fig. 1, 57°48′34″N 8°36′6″W) is located on the west of the island and consists of extensive steep sloped talus fields (60–70% cover), with areas of scattered short grass, leading to the edge of high sea cliffs. It is the nesting site for large numbers of northern fulmar, Leach’s storm-petrel, Manx shearwater, and Atlantic puffin (total breeding adults across all species >20,000), as well as smaller numbers of European storm-petrel and common guillemot28,29. The main seabird breeding season is between April and September, after which birds depart the island until the following year.

Village Bay (Fig. 1, 57°48′53″N 8°34′15″W) is located on the sheltered southeast corner and is the main bay on the island. The area largely consists of short, mixed grasses and herbs with areas of heather on higher slopes. Village Bay was previously permanently inhabited by humans, and as such contains stone walls, cleits (stone storage or drying huts) and abandoned houses, where small numbers of fulmar and European storm-petrel nest in the summer (<100 breeding adults). This area also contains the highest density of feral Soay sheep on the island due to the high quality of vegetation found there, with sheep carcasses being present in the area resulting from overwinter mortality. This is the only sampling site close to the manned Ministry of Defence (MoD) base, and buildings occupied seasonally by National Trust for Scotland and research staff47.

Glen Bay (Fig. 1, 57°49′10″N 8°36′16″W) is in the north coast of the island and consists of steep grass slopes interspersed with talus at one edge, leading to a flat area of mostly grassland. Areas of talus are used by a small number of fulmars, Manx shearwaters, and great skuas for nesting (<100 breeding adults). The bay is quite exposed, and during December and January receives no direct sunlight. During these winter months, and often extending to March, this area commonly contains fresh sheep carcasses.

Eleven trapping sessions took place between March 2010 and September 2012 in spring (March), early summer (June), late summer (August) and late autumn (November). Each session consisted of five consecutive nights of trap deployment at each site. Sites were trapped sequentially as far as logistically possible; for example, it was not considered safe to trap at Carn Mor during strong westerly winds.

Longworth traps (Penlon Ltd., Oxford, UK) were arranged at each site in a grid of 100 trapping stations (arranged in 10 × 10 grid format, 10 m from each other). Each station contained two traps, totalling 200 traps per grid. Traps were wrapped in bubble wrap to provide insulation and were baited with shelled peanuts, and carrot pieces, and stuffed with dry grass as bedding. Traps were placed within the cover of rocks or walls where possible, before being left in the same location for the duration of the trapping session. Trap position was repeatable between sessions. The traps were checked each morning for mice.

Newly caught animals were marked either with a passive integrated transponder (PIT) tag (AVID Plc, Lewes, UK), inserted into the scruff of the neck, or with individual ear punch patterns. Biometric data, including sex, age class, reproductive and body condition, were recorded for all caught mice, when weather permitted47. On the first capture per trapping session for each mouse, a ~100 µl blood sample was taken through a submandibular venepuncture. Mice were then released at the point of capture, and traps reset with fresh bait and bedding. All work was subject to the University of Edinburgh’s ethical review panel, and experimental protocols were undertaken under licence from the UK Home Office. All procedures were performed in accordance with relevant guidelines and regulations for working with live vertebrates.

Blood samples were drawn into non-heparinised capillaries. Only red blood cells (RBC) were processed (as below) and used in subsequent data analysis, which due to the turnover rate of RBC, would allow us an indication of mouse diet over 1–3 weeks48,49,50,51.

A range of potential food items found at the sample sites were also opportunistically sampled. These included invertebrates (beetles, spiders, earwigs, woodlice, worms, slugs, bristletails); sheep carrion; plants (Caryophyllales, Fabales, Lamiales, Paoles, Asterales); fungi; and egg, blood and muscle samples from seabirds (Atlantic puffin, Leach’s storm-petrel and northern fulmar). Seabird and sheep carrion samples were lipid extracted to remove any confounding influence of these compounds52. All samples were reduced to dry weight in an incubator at 60 °C for 48 hours. Samples were then homogenised using a pestle and mortar in preparation for isotope analysis.

We first used general linear models (GLMs) to test how δ15N and δ13C of mouse RBC were affected by sample site (three levels = Carn Mor, Glen Bay, Village Bay), month (four levels = March, June, September, November), and year (three levels = 2010, 2011, 2012). Interaction terms between month and site were included in addition to main effects of site, month and year. Normality of the residuals, and homoscedasticity were checked for both models, and δ13C values were found to be skewed. A constant of +35‰ was applied to the δ13C data to produce positive values in order to use the Box-Cox function in the ‘MASS’ package53. δ13C values were square root transformed in line with recommended Box-Cox transformations (λ = 0.5), which resulted in a largely normal distribution, with some non-linearity around the tails.

To investigate whether δ15N and δ13C prey group values varied between the seabird breeding season and non-breeding season we used MANOVA and ANOVA tests. Normality of the residuals and homoscedasticity were checked for all models. A constant of +10‰ and +35‰ was applied to δ15N and δ13C data, respectively, to produce positive values for Box-Cox transformation (using most likely λ value) when residuals where not normally distributed. We further investigated whether δ15N and δ13C prey group values varied between sampling site using non-parametric Kruskal-Wallis rank sum and post-hoc Wilcoxon pairwise test, due to non-normal residuals and/or lack of homoscedasticity for MANOVA and ANOVA models. The non-parametric test results are reported but (interestingly) the significant differences were found to be the same as the excluded parametric models.

The isotopic niche width was calculated using standard ellipse areas (SEA) in SIBER44 (requiring the use of ‘rjags’54 and ‘hdrcde’55). This is a bivariate measure of the distribution of individuals in isotopic space, with the ellipses set to enclose 95% of the data44. A Bayesian estimate of SEA (SEAB) was calculated using Markov Chain Monte Carlo (MCMC) simulation (50,000 iterations) to produce modes and 95% credible intervals (CrI). Differences in the size of isotopic niche widths (as SEAB) among locations and between seabird breeding seasons were evaluated by calculating the probability that the relative posterior distributions of the niche size were significantly smaller or larger (α = 0.05). The extent of isotopic niche width overlap (%) between locations and seasons was calculated from SEA based on the maximum likelihood fitted ellipses.

Bayesian mixing models within SIMMR56 were used to predict the relative proportions of putative dietary sources consumed by mice from each sampling location and between seabird breeding and non-breeding seasons. Food item SI values were combined into 5 dietary source groups (invertebrates, plants, sheep, fungi and seabirds) and split into the seabird season they were collected in (breeding and non-breeding). Key to mixing model efficacy is an accurate characterization of potential sources. This was checked by observing whether mixture values (mice RBC) lay within the fuzzy convex hull of the sources values in an iso-space plot45.

During the process of assimilating dietary nutrients, isotopic ratios in the consumer change relative to the dietary values, termed ‘trophic discrimination factors’ (TDF). These factors need to be incorporated into mixing models to enable correct proportioning of dietary sources. Since species- or tissue- specific TDFs were unavailable for St Kilda field mouse we used published TDFs from blood in a feeding experiment on laboratory mice (Δ13C = 1 ±SD 0.15‰; Δ15N = 3 ±SD 0.2‰)57. Concentration dependence means and standard deviations for model dietary source groups were derived from the % weight of carbon and nitrogen in the putative food items.

The models were based on MCMC simulation methods (iterations = 50,000, burn in = 5,000, thinning = 10, chains = 4) and run separately for samples collected in seabird breeding (BS) and non-breeding (NBS) seasons. Model convergence and fit were checked using Gelman diagnostic values and plotting the posterior predictive distributions.

Center for Integrative Medicine | University of Maryland School of Medicine

Mon Apr 13 , 2020
The Center for Integrative Medicine at the University of Maryland School of Medicine is built on a firm base of innovative, rigorously evaluated research, education that promotes wellness of the patient and the healthcare provider, and superior clinical care that embraces patient-centeredness and partnership with the provider. From the Director […] 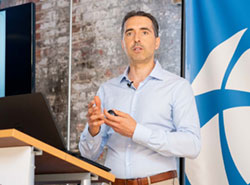