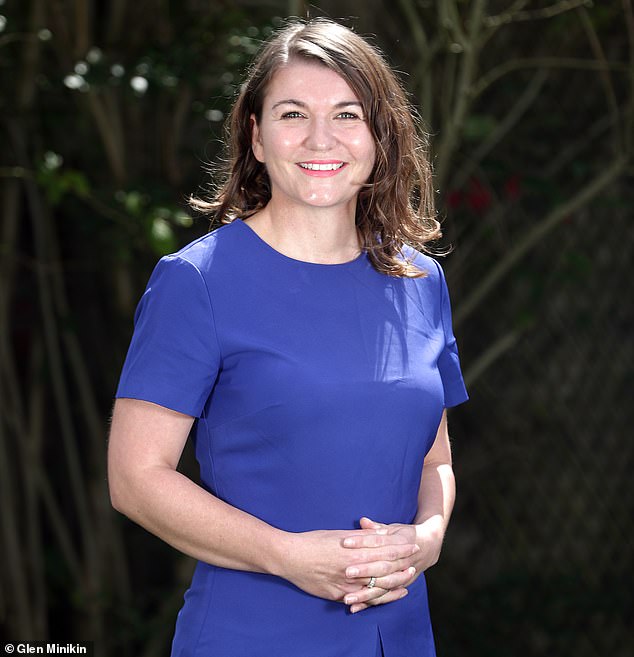 Patients face agonising waits for dental treatment after ten million appointments were delayed because of Covid.

The British Dental Association (BDA) warned that the waiting list backlog could take months to clear as campaigners said the crisis is disastrous for children’s oral health.

While most surgeries reopened last month, strict infection control rules mean they are restricted to just a handful of patients a day.

Patients waiting for dentist appointments could face additional charges up to £40 for PPE. Paula Scurfield, 41, (above) says she was refused treatment unless she paid a £25 levy

The BDA now estimates more than ten million check-ups and treatments – such as fillings and root canal work – were put on hold during lockdown.

Even those patients lucky enough to get an appointment face charges of up to £40 for PPE on top of any treatment costs.

Health campaigners say the crisis could be particularly devastating for the oral health of children, with tooth extraction already the leading cause for hospital admissions in youngsters.

The lack of routine appointments could also see diseases like mouth cancer being missed.

A mother says she was refused treatment by her dentist unless she paid a £25 levy towards PPE.

Paula Scurfield, 41, broke her tooth during lockdown and her 20-year-old son Dale had gum inflammation.

She booked their appointments at Clifton Moor Dental Centre in York but was told to pay a £50 PPE fee for them both or they could not attend.

She said: ‘I paid it because I needed the appointment. It was taking advantage of a dire situation.’

Samantha Atkins from the practice said it had been hit by ‘significant costs’ due to the virus.

Experts warned the disruption could last months or years in the event of a second wave.

They said it was not as simple as ‘flicking a switch’ now surgeons had been given the go-ahead to practise again.

The BDA, which represents 22,000 dentists in the UK, said thousands of clinics were struggling to stay afloat, threatening to leave millions without a dentist.

Most had not been eligible for government support which has left them hanging in the balance.

Mick Armstrong, chairman of the BDA, said higher costs and fewer patients meant some private practices – which also operate under smaller NHS contracts – have started to go into liquidation.

He said: ‘It’s a struggle dealing with the backlog, let alone new cases. Ministers must ensure this does not become the new normal.

‘We have thousands of practices struggling to stay afloat – if they go under their patients have nowhere to go.’

Before coronavirus struck, ten million treatments would have been performed by NHS and private dentists over a three-month period, the body said.

But treatment fell by 97 per cent after dentists were ordered to close their doors during lockdown, leaving a small number of ‘hubs’ to treat dental emergencies.

Since reopening, most practices are operating at a quarter of their normal capacity. 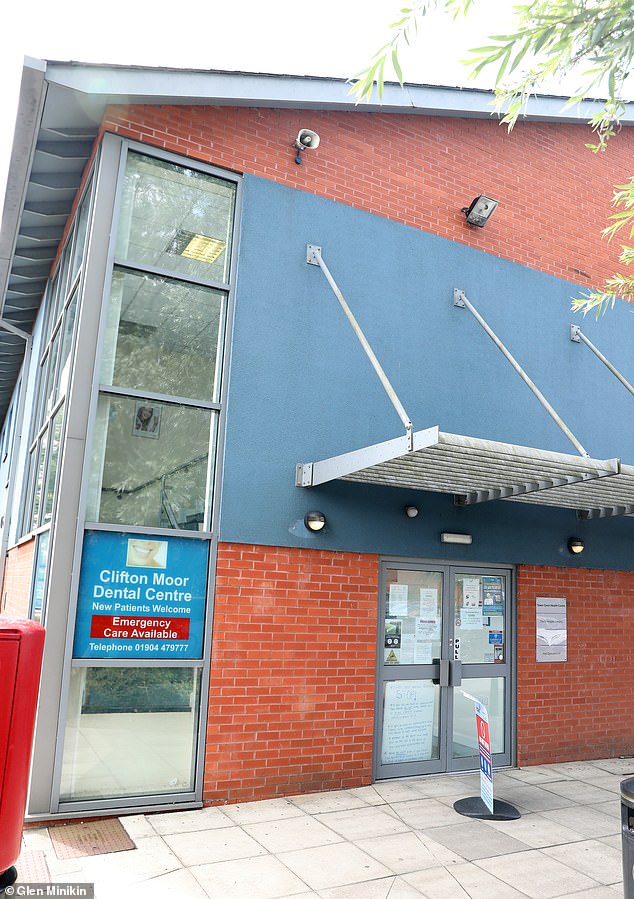 Ms Scurfield was told by Clifton Moor Dental Centre in York (above) to pay a PPE fee or her and her her son could not attend. Patients also face delays as 10million visits were delayed due to coronavirus lockdown

Staff are also having to screen all patients for coronavirus symptoms, put on PPE and disinfect equipment which potentially doubles the amount of time needed for simple treatments.

The difficulties have led many surgeries to stop accepting new NHS patients, forcing many to go private or rely on emergency hubs.

The owner of a private dental practice is worried her business will close.

Christina Chatfield, 56, is £100,000 in debt and cannot afford to pay rent and staffing costs. Although Dental Health Spa in Brighton reopened, the number of patients it can see each day has reduced by half.

She said: ‘I put everything into this so I won’t go down without a fight.’

In Norfolk, campaigners warned that patients can only see dentists if they are ‘in agony’ after all but two of the county’s practices stopped taking new NHS patients.

Alex Stewart, from Healthwatch Norfolk, said the group has been contacted by dozens of patients who are unable to access dental care unless they called NHS 111.

He said: ‘It’s been difficult to sign up to an NHS dental practice for a few months and Covid compounded the effects.

‘Things like mouth cancers could be being missed and I think there is a potential, especially for children, where we could be storing up big problems for the future in terms of oral healthcare.’

Matthew Garrett, of the Royal College of Surgeons of England, said patients should expect delays for some time.

He said: ‘We are not flicking a switch but entering a phased transition to the resumption of a full service and the pace of reopening remains dependent on a decline in infections.’